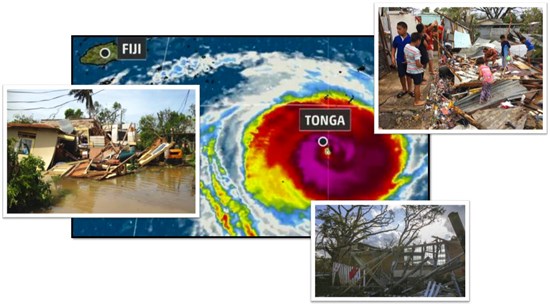 The islands of Tonga in the South Pacific were devastated by Tropical Cyclone Gita and her 140+ miles per hour (230 km/h) winds earlier this year (Feb. 12), and the island nation is still in severe need of assistance. If you are unfamiliar with the storm term “cyclone,” it’s the same thing as a hurricane.
Gita flattened parts of the Tonga Parliament House, wiped out schools, churches and homes and basically just obliterated the nation’s infrastructure. According to the British Met office, Gita was the worst cyclone to pass close to the Tonga main islands in more than 60 years.
While, the storm did not get much, if any substantial coverage on U.S. national or local newscasts, that doesn’t mean that its affects were not intimately felt here in Central Texas – especially by the conference’s vibrant Tongan community.
Many [most] of our church members have family still living in Tonga whose homes and livliehood were destroyed by Gita,” stated Alex Latu, pastor of Tongan First UMC in Euless, Texas. “We are planning on sending aid to help our families, friends and all that need it and would love all the churches in the Central Texas Conference to help us.”
Bishop Lowry and the Central Texas Conference Cabinet are calling upon the churches of the Central Texas Conference to receive a special offering to support Cyclone (Hurricane) Gita Relief efforts in Tonga. Churches are asked to receive a special offering in support of Cyclone Gita Relief on April 29 – or on another Sunday as close to that date as possible.

Tonga Cyclone Gita Relief was originally announced as a co-recipient of the Central Texas Annual Conference 2018 Offering along with the Youth Service Fund. However, after receiving updates from Tonga, it was decided that the need was too great and immediate to wait until June.